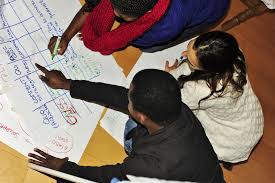 Dialogic —Dialog is the heart of the new communication paradigm.  Development communication should foster dialog to facilitate mutual under­standing, to assess the situation, and to seek wider consensus.Professionally directed, dialog is an invalu­able research tool and is absolutely to build trust, optimize knowledge, minimize risks, and reconcile different positions.
Inclusive—This methodological frame work might focus only on selected groups of stake­holders. Omitting a group on a basis that might not seem rel­evant can cause problems. Two-way communication should always pay special attention to groups that are marginalized or at a disadvantage in society. Gender issues are always a primary concern in this context, as well as issues related to the poor, or any other vulnerable group.
Heuristic— The heuristic and explorative scope of development communication, strengthened by its analytical and dialogic features, constitutes its main value-added in addressing and rectifying the past fail­ures in development.

Analytical—It conclude large amount of its work, such as the assessment of political risks and opportunities, the effectiveness of diffusion and dissemination activ­ities  and it we know how effectively people are empowered to voice their perceptions and opinions.
Participatory— Only genuine communication can facilitate effective participation,and there are  different types of participation.
Levels of Participation and Communication
Inter disciplinary—A development communication body of knowledge includes a number of principles borrowed from other disciplines such as ethnography, sociology, political economy, adult education, and marketing.
Strategic—The principle of strategy emphasizes the professional and timely application of communication techniques and methods to achieve intended objectives.

Persuasive— In development communication, persuasion can be used to induce voluntary changes in individuals. Persuasion should be based on accurate infor­mation and within a context of two-way communication.
Development Communication

http://download.nos.org/srsec335new/ch11.pdf A radio station also broadcasts programmes of different types. These different types of programmes a The requirements of listeners of radio stations are not the same. To serve them, we need to know many facts about them. So  we should know about the audience: (a) The total population of the area. (b) Number of men and women — Sex ratio (c) Literate people/Illiterate people (d) The languages spoken in the area. (e) Schools/Colleges (f) Children going to school (g) Health facilities — availability of doctors, primary health centre, clinics,hospitals. (h) Any major diseases (i) Religions in the area-population wise (j) Power supply (k) Nearest radio stations/Television stations (l) Climate of the place (m) Main occupation of the people (n) Income per head/people below poverty line (o) Roads/transport facilities (p) Irrigation facilities (q) Number of people engaged in agriculture/other occupations. (r) Types of crops. Rad

CHARACTERISTICS OF TELEVISION AS A MEDIUM

AUDIO VISUAL   MEDIUM While radio has sound, television content includes both sound and visuals. This audio visual character of television makes it a magic medium which allows us to watch the world from our drawing rooms. This powerful visual nature helps television to create vivid impressions in our minds which in turn leads to emotional involvement. The audio visual quality also makes television images more memorable. DOMESTIC MEDIUM To watch television, we need not leave your drawing room. No need of going to the movie theater or buying tickets. We can watch television in the comfort of our home with our family. This is why television is generally regarded as a domestic medium. It provides entertainment and information right inside our homes and has become an integral part of our everyday lives. It can actually pattern our daily activities. Even our family makes it a point to watch their favorite serial at a particular time and adjust dinner timings accordingly. This

The western model for development predominated in 1950s and 1960s.   The modernization paradigm arose soon after World War II, in  1949.   It envisioned development as a challenge to bring the "underdeveloped countries" out of their conditions of poverty by mod­ernizing them and by  by free-market approaches.  The origin, principles, and applications of this paradigm should be considered within the historical context of the postwar years, also known as the Cold War period. On that tine when world influence was polarized by two superpowers: the United States and the Soviet Union. Their influence reached every sphere of the international sce­nario, including development.  In this context, the modernization paradigm pro­moted by political scientists and scholars of Western countries became so strong and so pervasive in every dimension of social life that it became also known as the "dominant paradigm." Rogers (1960) called this the “dominant paradigm” o